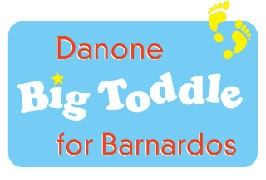 Danone Big Toddle For Barnardos invites toddle groups from junior schools, crèches, Montessori’s and families to do a simple half-mile sponsored toddle. Every cent raised goes directly to the essential work Barnardos does with vulnerable children in Ireland.Over the past five years the Danone Big Toddle For Barnardos has seen 70,000 children taking part. Over 2,800 groups have organised sponsored toddles and together have raised an amazing €1.5 million, making this the biggest fundraising event for Barnardos.

This year Barnardos have the biggest ever target of half a million euros to bring the total to €2 million so they really need your help.

Where the money goes…

The entire cost of their website and all the pack materials has been covered by the sponsors Danone, so all funds raised go directly to support Barnardos work.

And your help really makes a difference to toddlers like Chloe.

As part  Athletics Ireland Family Fitness Festival at Farmleigh in the Phoenix Park on July 31, programme of events will be a Danone Big Toddle for Barnardos for all the under 5’s to take part in! This fun event will simply involve a short race / toddle from point to point for all children under 5.

Why not come along with all the family and join in the fun and help us raise some much needed funds for Barnardos! To take part, all we ask is that you make a suggested donation of €5 (but any donation will be greatly appreciated) to help Barnardos continue working with over 5,000 of Ireland’s vulnerable children and families.

TODDLE TIME for the Danone Big Toddle will be 12.00pm and 14.00pm so look out for the Barnardos Toddle team in the exhibition tent to collect your toddler’s hat and sticker before the race

When we first met Chloé she was two years old. She lived with her mum and dad in a dark cramped one-bed basement flat. There was no safe space outside to play so Chloé never had a chance to meet other children. Chloé had been living in this flat for a year, after moving around hostel and temporary accommodation for the first year of her life.

Her mum and dad are young and both grew up with serious family problems. Her dad spent a lot of time in the care system and both her parents were abused as children. They turned to drugs to dampen the chaos and hurt inflicted on them in their young lives.

The family was isolated and didn’t have the helping hands of parents or family to help out with Chloé. They were living in appalling conditions of poverty and Chloé’s health was suffering as a result. She was underweight, had head lice and skin rashes like ringworm and her speech and language was delayed. Her parents love Chloé and have a very close bond with her. They were very open to looking for support, so they came to Barnardos. With our help, they sought treatment for their drug addictions and are now in a stable programme.

Chloé now attends an Early Years service where a Barnardos case worker monitors her safety and well-being and ensures her needs are met. She gets a nutritious dinner and has begun to put on the weight she needs. Barnardos also helped with Chloé’s referral to the speech and language therapist.

We also worked closely with Chloé’s parents to support them with practical skills and encouraged them to join a Barnardos parenting programme. There they received formal one to one counselling and got practical help around budgeting, family routines and parenting skills.

With Barnardos help Chloé’s young life is looking a lot brighter and, with the love and support of her parents, we will be able to put right the things that have caused her to fall behind so early in life.

Chloé will continue to attend a Barnardos service until she is ready for big school. This way she will grow and develop like any other toddler, giving her the best possible start in life.

This work would not be possible without the help of the thousands of toddlers in Ireland who have taken on the challenge to support Barnardos and the work we do with children like Stephen.