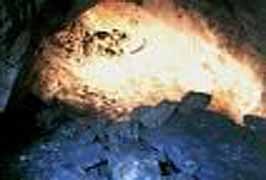 Consisting of a series of chambers formed over millions of years, the cave contains some of the finest calcite formations found in any Irish cave. The cave has been known to man for many centuries and is first mentioned in the 9th century Irish Triads.

The most interesting reference however, comes from the Annals which tells of a Viking massacre at the cave in the year 928 A.D.  Archaeological finds within the cave confirm Viking activity. Exhibitions and displays in the Visitor Centre. The cave is inaccessible for wheelchair users.

Known in Old Irish literature as one of the darkest places in Ireland and as the place where the monster Luchtigern ‘The Lord of the Mice’ was slain, this cave was plundered by Godfry and the Vikings of Dublin in 928. In this raid, 1,000 people were killed, and the numerous human bones found in the cave are thought to be the remains of the victims.
The cave is divided into three main parts, of which Haddon Hall and chambers leading off it are difficult to access. The wide entrance shaft leads to the second part, which is the main chamber. Ahead lies a high chamber which is practically a cul-de-sac, while the portion to the left has a floor of eccentric blocks and a stalagmite on the east wall. From here an ascent leads to the third part, the chamber with the ‘Market Cross’ – a huge stalagmite in the middle of the triangular chamber. To the right and left of the chamber are other dripstone formations, and the blocks forming the floor are covered in stalagmite bosses.