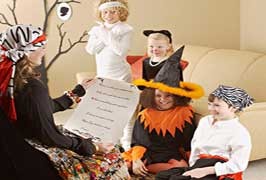 Familyfun have put together a small collection of Halloween Poems . We hope your enjoy them.

It`s late and we are sleepy,
The air is cold and still.
Our jack-o-lantern grins at us
Upon the window sill.
We`re stuffed with cake and candy
And we`ve had a lot of fun,
But now it`s time to go to bed
And dream of all we`ve done.
We`ll dream of ghosts and goblins
And of witches that we`ve seen,
And we`ll dream of trick-or-treating
On this happy Halloween.

Underneath the lamp post,
In the middle of the night,
A ghost bus make a silent stop,
A strange and fearful sight.

At the bus top at your corner,
Something big and green climbed down.
It’s looking for your bedroom,
And it has searched all over town.

You thought it couldn’t find you,
That you were safe and you were sound.
You thought that you could hide,
Where you never could be found.

But now it’s almost here,
You know it loves the dark of night.
There’s only one thing you can do,
Quick! Turn on the light!

Skeletons and ghosts and ghouls,
Grinning goblins fighting duels,
Werewolves rising from their tombs,
Witches on their magic brooms.

The skeletons are out tonight,
they march about the street,
With bony bodies, bony heads
and bony hands and feet.
Bony bony bony bones
with nothing in between,
Up and down and all around
they march on Halloween.

I’m a little scarecrow,
Raggedy and worn
I wear a hat,
And a shirt that’s torn
When the crows come,
I wave and shout,
“Away from my garden-get on out!”

Withch witch, where do you fly?
Under the clouds and over the sky.

Witch, witch, what do you eat?
Little black apples from Hurricane Street.

Witch, witch, what do you drink?
Vinegar and good red ink.

Witch, witch, where do you sleep?
Up in the clouds where the pillows are cheap.

Ghosts don’t have shadows and leave no footprints !
Wearing garlic around your neck will keep vampires away !
Shooting a werewolve with a silver bullet is supposed to kill it !
If you throw a key at a ghost, the ghost will disappear !
If a candle flame turns blue, it means a ghost is in the house!
Some people believe that cat bones make you invisible !

HOW TO MEET A WITCH

First, put your clothes on inside out.
Then walk backward to where two roads meet.
If you wait until midnight, you will see a witch!

THE NIGHT OF HALLOWEEN.

Ghosts and goblins..skeleton’s too.
Moaning and groaning, waiting for you

Cemetery ghouls roam the ground
Not one unopened grave is found

It’s a time like you’ve never seen
Tonight’s the night of Halloween.