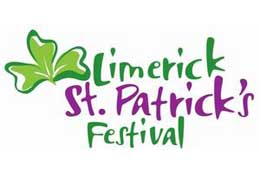 Limerick St. Patrick’s Festival showcasing the best that the Treaty City has to offer!  Limerick St Patrick’s Festival will feature a huge parade with more than 3,500 participants and the country’s only international band festival and encourages all participants to be creative about having pride in their city and a huge number of local, national and international groups will participate in a festival we can all be proud of! And on Sunday 20 March the  International Band Championship will take place.

There is so much live entertainment to choose from including major parades, street theatre, live music, dance, horse racing, Strong Man challenge, sport….and much…

Among the participants in this year’s Parade will be Waterford-based Spraoí, an internationally renowned streets arts company who will be bringing their spectacular Stag Show to Limerick’s main thoroughfares on March 17th. Artastic, in collaboration with Spotlight Stage School, were last year’s overall winners and are coming together this year with another show-stopping spectacle.

WET weather has seen a vintage carnival which was to be erected at Arthur’s Quay Park in Limerick city cancelled.

Limerick St. Patrick’s Festival will this year showcase the best the city has to offer in sport, culture, community organisations and the variety of multi-cultural groups now living in the city and the highlight is the traditional St Patrick’s Day Parade. The theme for this year parade is “Our Stories, this is where we belong” and they are expecting over 80,000 people to attend.

Parade will begin at 12.00 and will follow the route down through O’Connell St and passed the viewing stand which will be situated outside Penney’s.

The Limerick International Band Parade and Competition is expected to attract thousands of spectators on to the streets of Limerick city this weekend as the  Limerick St Patrick’s festival gets underway!

More than 1,200 musicians from marching bands around Ireland, the USA, Germany, Africa and Northern Ireland will join Limerick’s finest to showcase their talents with adrenalin pumping music for all the family to enjoy this Sunday, March 19 at 12 noon.

Fun Filled Day of Family Friendly Fun, included on the day will be:

For Food, Crafts, Music and Fun, Limerick Milk Market has got you covered come sunshine or none.

Join in on the morning of the International Band Competition for a tour of Limerick City from the cycling saddle.

You will be meeting in Limerick’s Medieval Quarter on Nicholas Street and will be taken on a historical sightseeing tour around some of the older parts of the city before you venture along the canal out as far as the University of Limerick.

You will be off the saddle and walking right into the heart of the city parade just in time to judge the bands for yourself.

This fun event for all the family will include a quiz with Castle animators, archery, art workshops with souvenir medallion making and much more!