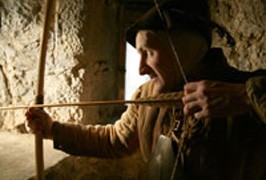 Actors in medieval costume will bring the fascinating history of the castle to life, where you will see their customs, some barbaric, some comical, first hand.

An Archer may accost you, a Medieval Cook may enlighten you, the Barber Surgeon may offer you a haircut and a tooth extraction as part of the Living History Live Performances!

Examine the models of Dalkey Quarry, the building of Dun Laoghaire Harbour and the Atmospheric and Funicular railways;

Experience the tranquility of the 10th Century St. Begnet’s Church and Graveyard; Read the local literary connections in the Writers’ Gallery.

The Modern Exhibition Area  looks out on the St Begnet’s Church & Graveyard. It houses the Rathdown Slab, a pre-Christian burial marker which was found in St Begnet’s Graveyard.

There are Information Panels on Dalkey’s origins which began in 4500BC on Dalkey Island. The stories and legends of Dalkey such as the Dalkey Gold Rush with Etty Scott and the Crowning of the King of Dalkey are also chronicled