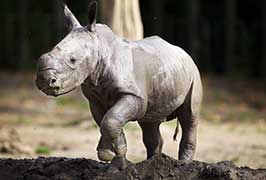 Dublin Zoo Celebrates the Birth of a Rhino Calf

Dublin Zoo is delighted to announce the arrival of a southern white rhinoceros calf. The male calf, who is yet to be named, was born to mother Ashanti and father Chaka at 1.45pm on Thursday 25th August and weighs approximately 60kgs.

The youngster joins the rest of the herd – Sam, Reni, Chaka, Zanta, Nyala and of course his mother Ashanti – at the African Savanna.

The newborn is Ashanti’s fifth calf and is another significant success for Dublin Zoo as part of the European Endangered Species Programme established to assist the survival of the near threatened southern white rhinoceros.

With numbers as low as 50 left in the wild in the early 1900s, this subspecies of white rhino increased to become the most common of all the rhino species. However the alarming increase in poaching since 2008 threatens the rhinoceros population in the wild.

It is estimated that 20,000 of these animals exist in the wild, the majority are found in South Africa, Zimbabwe, Namibia and Kenya. Poaching for rhino horn is the most significant threat to the wild population.

Dublin Zoo financially supports the conservation organization Lowveld Rhino Trust, who are based in Zimbabwe and help protect rhinos from poachers.

The children of Ireland are invited to suggest a name for the newest arrival based on his African origin. Name suggestions can be submitted at www.DublinZoo.ie

Helen Clarke-Bennet, team leader of the African Plains said, “We are absolutely thrilled with the new arrival. Ashanti is an experienced mother and the birth was very relaxed. The mother and calf are bonding and will remain very close for the first year of his life.”

On September 24th & 25th, Dublin Zoo will be hosting Rhino Awareness Weekend where visitors can learn about rhinos and the threats they face in the wild. The family event will have lots of fun activities including face-painting, nail art and much more!

Since 2009, Dublin Zoo has been supporting the Lowveld Rhino Trust in Zimbabwe. The Lowveld conservancies are home to approximately 50% of Zimbabwe’s white rhinos and 80% of the country’s black rhinos. However, due to increasing political, social and economic problems in Zimbabwe, poaching has increased greatly. The Lowveld Rhino Trust is involved with translocating rhinos to safer areas, treating wounded rhinos and helping authorities apprehend poachers. In addition to this work they also monitor rhino populations and develop community outreach programmes.

Dublin Zoo is a not for profit organisation, registered charity number CHY 2964. Since Dublin Zoo first opened its doors in 1830, its 28 hectares has been transformed with the support of the Irish public and now attracts over 1 million visitors a year. All funds received by Dublin Zoo including gate takings, donations and sponsorships are directly invested into the day to day management, running and up keep of Dublin Zoo’s animals, their habitats and conservation projects. Modern Zoos, like Dublin Zoo, adhere to strict codes of practice in animal welfare laid down by European and Global Associations. Animals at Dublin Zoo therefore live enriched lives in natural social groups in order to encourage breeding and raising young.

Dublin Zoo is easily accessible by bus, LUAS, and train and is open every day with the exception of Christmas Day and St. Stephen’s Day (26th December).  Admission prices and opening times can all be found on the website.  Dublin Zoo is accessible by the less-abled and manual wheel chairs are available on request. 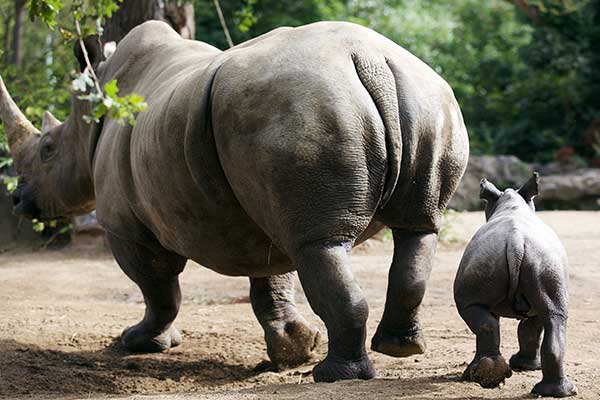