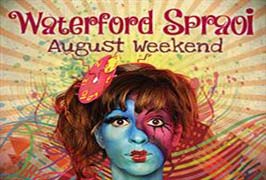 Spraoi International Street Arts Festival has been staged in Waterford, Ireland, since 1993. For three days each year residents of this medieval city take to the streets and enjoy an international programme of street arts and spectacle. The festival is staged on August Bank Holiday Weekend, always marked by the first Monday in August.

Waterford’s narrow medieval streets, squares, quays and historic buildings provide an atmospheric backdrop to Spraoi’s celebration of contemporary performance culture. The majority of the events are free and suitable for all ages

On Sunday of the August Bank Holiday Weekend at 9.30pm over 200 costumed 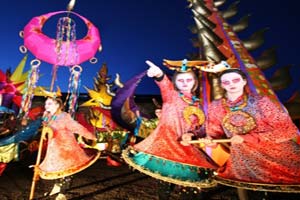 performers take to the streets of Ireland’s oldest city to perform to the theme of the event. Inspired by the Yeats poem, the annual Spraoi Parade mixes magic, mythology and creativity to produce a stunning street spectacle. The Parade with exotic floats, live music, special-effects, is created by a core team of professional artists at Spraoi’s Waterford studios aided by a large corps of volunteers.

This is a festival highlight, a feast for the imagination, followed by fireworks, not to be missed!

Waterford Spraoi Festival will present an exciting programme of music from around the world. All music events will be free, with gigs being presented at indoor and outdoor locations.

Admission:- This is a FREE event