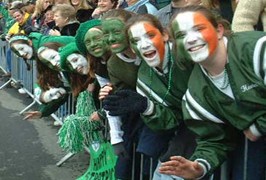 Billed as the best St Patrick’s Day Parade in the world, the Dublin parade has certainly improved hugely over the last number of years and has taken on a distinctly carnival feel. Street drama is provided by elaborate floats and performing artists from pageant companies from all over Ireland. Marching bands still feature prominently.
The St Patricks Parade leaves Parnell Square North at 12 noon and takes approximately 2 hours to pass.The Festival Parade will now come down the EAST side of O’Connell Street (Clery’s side), O’ Connell Bridge East and on to Westmoreland Street. These changes will affect how the general public get around the city.  Diversions will be in place which may lengthen journey times so it is advised to plan ahead.

The Festival Parade route is extended and there is now viewing on Kevin Street.

Getting To The St Patrick’s Day Parade

Based on the experience of previous years, it is probably advisable to take public transport to your local parade as there will be both road and parking restrictions to facilitate the events taking place.

St. Patrick’s Festival in Dublin brings the nation alive, and promises six lively days and nights of free celebrations and encompasses a feeling of what it means to be or just feel Irish.

A huge number of events are planned across the capital city and the rest of the country and many are free. From ceilis to treasure hunts, funfairs to comedy, there is something for every member of the family. The festivities culminate on 17 March, St Patricks Day with the traditional parade