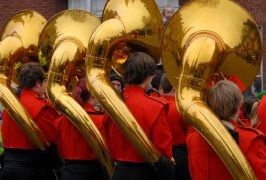 In Ireland, St Patricks Day has always been about the St Patricks Day Parade and parades remain the focus of celebrations of our patron saint all around the country.   Local parades still feature the usual mix of marching bands, local community groups, dancing majorettes and local business floats. A touch of the exotic is often added by the inclusion of a high school band from the USA.

The Cork St. Patrick’s Festival will be madness as the street bursts into life with FREE family-fun entertainment including music, circus walkabouts and children’s workshops in the City Centre over the St Patrick’s weekend.

The Cork St. Patrick’s Day Parade will take place in the heart of the City on 17th March

The Parade route runs from the South Mall to the Grand Parade, along St. Patrick’s Street and finishes at Merchant’s Quay.

Come join Cork as the streets burst into life with free family-fun entertainment as the centre of the city is set to become transformed by a riot of colour and sound. There will be something for everyone with food markets, street performers, musicians and marching bands bringing high-octane entertainment and lots of laughs.

With so much to choose from and events free, Cork is definitely the place to be for St. Patrick’s weekend

To Download Map Of The …. Dublin St Patricks Parade

Pipe bands, dance groups and performance artists come from all over the world to Galway each year to experience a parade that is widely regarded as one of the best in Ireland.

The beauty of the Galway Parade is that it is small enough for group to truly feel a part of, yet big enough to create a special atmosphere. Up to 50,000 spectators line the streets each year and some of the narrow streets create an intimate cauldron that is an unforgettable experience for all participants.

The Parade start time will be 11.30am and finishing at approximately 1.00pm and will through the centre of the medival City, a 1.5 mile journey through narrow cobbled streets, turning onto long wide streets. The Parade route is thronged with spectators from start to finish, creating a non-stop carnival atmosphere

Limerick St. Patrick’s Festival will this year showcase the best the city has to offer in sport, culture, community organisations and the variety of multi-cultural groups now living in the city
Parade will begin at 12 noon and assembly will be from 10.00

The Parade route will be down through O’Connell St and passed the viewing stand which will be situated outside Penney’s.

The parade will then turn right and enter the Michael Street area, the designated dispersal zone.

To Download Map Of The….  Limerick St Patricks Parade

The Parade will follow the traditional parade route of coming down the Quays from the Bus Station onto The Mall and ending at the junction of The Mall and Parnell Street.

The parade will will officially commence at 13.00 on 17th March and follow its usual route .

Unusually, the first ever St Patricks Day Parade took place in 1762 in New York City, when Irish soldiers serving in the British Military marched through the city with their music. Today, St Patricks Day Parades take place all over the world in cities and towns with vibrant Irish communities. St Patricks Day is a national holiday in Ireland and also on the Caribbean island of Montserrat and the Canadian states of Newfoundland and Labrador.
The focus of the celebrations, St Patrick is the patron saint of Ireland and the man who brought Christianity to Ireland. Legend has it that St Patrick banished the snakes from the country. In fact, Ireland never had snakes and it is widely believed that the snakes are in fact a metaphor for paganism which was the spirituality of pre Christian Ireland. Either way, snakes are usually a feature of the St Patricks Day Parades to this day.
In Ireland the Dublin St Patricks Parade has always been the biggest in the country and is billed by the organisers as the best in the world. And like in many of the Irish city parades, the parade has grown and developed way beyond the marching bands and majorettes. There is now a far more theatrical element to the large parades with pageant companies and street performers adding a very carnival feel to the proceedings.