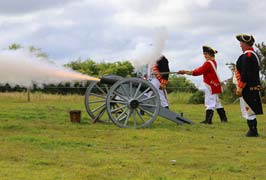 Witness history unfold this August Bank Holiday weekend at the free Vinegar Hill Battle Re-enactment Festival. Experience the sights and sounds of battle with pike charging rebels capturing Enniscorthy Town or the cannon firing, musket wielding Redcoats assaulting Vinegar Hill. Professional re-enactors from Ireland, England, Scotland and further afield are currently planning their assault on rebel positions to recreate Ireland’s most famous battle at Ireland’s largest battle re-enactment. The Battle of Vinegar Hill Re-enactment is a free festival that attracts thousands of spectators to Enniscorthy town as it explodes into rebellion with cannon bombardments, cavalry assaults, muskets volleys and pike charges, clouding the town in the sights, sounds, and smells of battle. While the rebel forces are growing larger every day with aspiring insurgents volunteering to take part as the famed pikemen of the 1798 Rebellion. Take part in living histories at the Rebel camp where Rebel commanders will be on the lookout for talented young pike men and women to train before the ensuing fight. Blacksmith will be on hand, shoeing horses and making pikes, swords and other weapons for the upcoming battle. Or join the Redcoats at garrisoned at Enniscorthy Castle and discover what life was like for soldiers during the 18th century. With 18th century crafts demonstrations, traditional entertainment and craft markets, the Vinegar Hill Battle Re-enactment Festival will cater for every interest. A family fun event not to be missed! The highlight of each day will be the staging of two full-scale battle re-enactments, with the Rebels capturing Enniscorthy Town on Saturday while the Redcoats take Vinegar Hill on Sunday. There’s also plenty of fun for all the family throughout the weekend. Including a visit to the rebel camp in the National 1798 Rebellion Centre, spy on the life of a Crown Force Soldiers in Enniscorthy Castle, view traditional crafts demonstrations, shop in our craft and antiques fairs or join us at our exhibition “Rebels V’s Redcoats” polo crosse match.