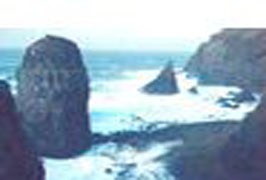 Bruces Cave in the cliffs of Raithlin Island, Antrim have magnificent interiors, some iridescent with reflected light, some with walls and pillars of white limestone. Most of them can only be reached by boat. The most famous is Bruce’s Cave, beneath the East Lighthouse. Robert the Bruce hid here in 1306 after his defeat by the English at Perth in Scotland. According to legend, the dispirited warrior watched a spider repeatedly trying to reach the roof of the cave by its thread. Eventually it succeeded. ‘If at first you don’t succeed, try, try and try again’ he concluded. With renewed determination, he returned to Scotland, defeated his adversaries, and gained the Scottish throne at the battle of Bannockburn.

Rathlin’s history is a tale of battles, massacres and troubles, brought about by its strategic position in the North Channel, between Ireland and Scotland. Francis (later Sir Francis) Drake landed guns here in 1575 and battered down the fort of Bruce’s Castle, possibly built by John de Courcy. Only a ditch and part of a gate and wall remain. A hill in the middle of the island, called Cnoc na Screedlin, ‘ The hill of Screaming’, got its name following a gruesome incident in the island’s history. A large force of Campbells landed on Rathlin in 1642 and slaughtered the MacDonnells. Their womenfolk looked on helpless from this hill

How To Get To Rathlin Island

For Further information about …… Raithlin Island