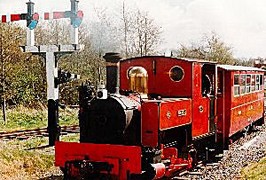 At Cavan and Leitrim Railway your family can step back in time and travel on a narrow gauge train, visit the transport museum and see an extensive collection of steam, diesel trains, rolling stock and vintage buses all of which allow you to trace the history of the Irish narrow gauge railway system.

The Cavan and Leitrim Railway is open to the public, with trains running on demand. A tour of the site will take approximately 40 – 50 minutes and includes a trip on the train and a tour of the engine sheds, workshops and the site in general.

Once your tour has finished feel free to browse around the shop in the restored booking office. Here you will find a vast collection of souvenirs, postcards, books and videos.

The Cavan and Leitrim Railway opening times are as follows:

With regret they have announced that they will not be running The Horror Express ( Annual Halloween event) or The Santa Train ( Annual Christmas Event)
Both events require a running train, but unfortunately works on the rail line will not be complete in time

At Hallowe’en there is the  Halloween Horror Express and festivities will be in full swing between 18.00 and 21.00. Be sure not to miss a great night.

The Cavan and Leitrim Christmas Santa Special  will be running in December where the kids visit Santa in his Grotto the adults can sit back and enjoy a nice cup of tea or coffee with a snack.

History Of The Cavan And Leitrim Railway

The Cavan and Leitrim Railway was one of the most fascinating and at one time busiest of Ireland’s narrow-gauge railways. Through the accident of its serving a coal field it remained open many years after most of the other 3 ft gauge lines closed, and in its last days made use of engines and rolling stock sent from these other closed systems.

But though the railway had a long career, the predominant theme throughout its life was struggle. In the early years directors faced hostile public opinion and struggle vainly to extend their line to the Arigna coal fields. When the extension was finally built – at a time when the political temperature in Ireland was rising, the initiative was taken by the Government.

Changes in the constitution of the Board in 1904 led to friction and some decisions were taken on ‘party lines’, not always to the best advantage of the Cavan and Leitrim.

Getting To Cavan And Leitrim Railway

Dromod is located 17km from Longford on the main N4 Dublin Sligo Road. The road is well signposted Ghost Train. As you enter the village from the Longford side turn left on the road for Mohill. About 1km on you will cross the main Dublin Sligo railway bridge. Turn left immediately after the bridge and they are located next to the Iarnród Éireann Railway station.

Ample praking is provided, how ever if you have a large party or if you plan to arrive by bus or by coach, it would be helpful if you could contacts them in advance.