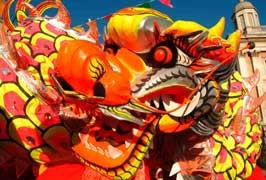 The Dublin Chinese New Year Festival in 2016 year celebrates the year of the Monkey.

A great day for the family to enjoy, this colourful festival includes many cultural features, street markets , live music, street entertainers and lots lots more. It is hoped that this will be a sustainable and vibrant annual festival in the years to come.

The Chinese Community has a long tradition in Ireland and especially in Dublin, starting back in the 1950’s when many will remember the first Chinese Restaurants such as the ‘Universal’, ‘Luna’ and ‘Sunflower’. From those small beginnings, a wide and diverse Chinese Community has grown with residents settled here from all parts of China.

To welcome in the Chinese New Year of the Monkey – The carnival comprising of many features including interactive art workshops, Chinese food and craft stalls, information booths, a well-being marquee and authentic Chinese performances such as lion dances and martial arts displays.

Bring along all your cheeky monkeys! DCNYF are delighted to present this year’s two-day Spring Festival Fair at The chq Building where you will be able to feast your senses at both indoors and outdoors activities. Along with Lion, Dragon and Unicorn performances there will also be an appearance of the famous Monkey King, or Sun Wukong, known  as a character from Journey to the West, one of China’s classic novels.

All welcome! Join us over this celebratory weekend full of fun activities. No booking required, however, early arrival is recommended for participatory classes.

The New Year’s Gala – the annual Chinese variety show watched by hundreds of millions across the world – will be screened live on Sunday afternoon.

The meeting point is confirmed once you book your ticket.

Author Eddie Lenihan will lead a Chinese-English storytelling session based on Irish Tales of Mystery and Magic, his collection of ancient legends, at the Central Library in the Ilac centre on Tuesday week.

The event is aimed at kids aged between seven and 12.

Get up close and personal with monkeys at this Dublin Zoo workshop.

Participants will be shown how to prepare and deliver some of the props and food items used to stimulate the animals.

Oriental food wholesaler Asia Market is offering a tour of its Drury Street supermarket, including a guide to the best ingredients needed to cook authentic Chinese meals, in two weeks’ time.

For those in search of a more hands-on food experience, Söder + Ko chef Kwanghi Chan will be doing a cookery demo at Cooks Academy the following week.

The hour-and-a-half lesson will go through the steps of making a traditional Chinese New Year dish.

In 1911, the last dynasty of China, the Qing, was toppled in a revolution that brought 2,000 years of monarchic rule to an end.

Interested in learning more? Head to Trinity College Dublin for Dr Isabella Jackson’s lecture on the anti-imperial movement, and how it compares to later revolution in Ireland.

Shan-Zhen explores the influence Shannon had on Shenzhen, a city in southeastern China, as it urbanised in the early 1980s.

Musician Wu Wei is one of the world’s leading players of sheng, the traditional Chinese mouth organ.

He will perform with Andreja Malir, principal harpist with the RTÉ National Symphony Orchestra, in the Chapel Royal at Dublin Castle on Saturday week.

Chinese brush painting is one of the oldest artistic traditions in the world. To celebrate Chinese New Year, the Library welcomes back Hoi-Shan Mak who will introduce this rich and beautiful technique. Limited to 15 places. €35 per person, materials provided. Booking essential. This event is now booked out. Please contact Aoife at 4070766 if you would like to be added to the waiting list

Monkeys have long been associated with fun and trickery in Chinese art. To celebrate the Year of the Monkey, learn how to paint those smart and mischievous animals. Limited to 20 participants ages 6-11 years. Free, booking essential