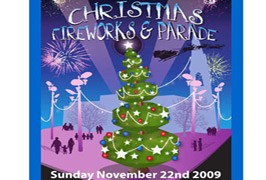 This Event Is Not Taking Place This Year

Dun Laoghaire is all dressed up for Christmas this year for the exciting Christmas Fireworks and Parade to officially switch on the Christmas Lights in the Town and Harbour.It will be a fusion of colour and vitality filled with community spirit for the vibrant Parade culminating in a magnificent fireworks display. The Parade assembles in The Peoples Park at 16.45 and sets off at 17.15 to make its way along Upper and Lower Georges St to the stage area at St Michael’s Church where Carol singers from The Dominican Secondary School will entertain. The procession through the streets will feature Gardai, Local schools, Lions Club, Vintage Cars, Library Road Play Centre, Harbour Police, Soccer Club, performing Irish Dancers, Fire Brigade, Patrick St. Cubs, Santa House, Polish Community.

The parade will feature special appearances by giant costumed characters and other entertainers including the Stedfast Brass Band and many other local groups.  Santa himself will be taking time out of his busy schedule to make a special appearance.

The Parade ends at Dun Laoghaire Harbour Plaza at 18.00 and then the lights on the magnificent Christmas tree will be switched on, while simultaneously all the Christmas lights in the town and harbour will come on as fireworks light up the sky to officially announce the beginning of Christmas in Dun Laoghaire.