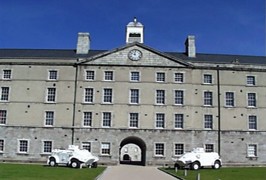 The National Museum at Collins Barracks is the oldest inhabited barracks in Europe and once one of the largest.

In recent years the National Museum of Ireland has taken over the Calvary Square ranges to display more of its large collection.On display are artefacts ranging from weaponry, furniture, folk life, and costume to silver, ceramics and glassware.

The barracks were erected in 1701 to the designs of Thomas Burgh (1670-1730) and it was his first recorded building. This is the earliest public building existing in Dublin with the exception of the Royal Hospital at Kilmainham and it was built on the site that a hopeful City Corporation had earmarked for a mansion for the Duke of Ormond. He was also responsible for the Custom House (1707) which was replaced by Gandon’s masterpiece in 1791.

This exhibition traces military history in Ireland, and uses original artifacts, letters, replicas and interactives to show how soldiering and war have affected the lives of Irish people. Three main themes are explored through the eyes of the average Irish soldier and civilian caught up in war and conflict here in Ireland: Irish soldiers at home; Irish soldiers abroad; and Irish soldiers in the 20th Century. The exhibition also looks at the economic and social aspects of war: why soldiers join armies; women and families at war; and soldiers’ personal experience of war and conflict

Admission to the Museum is free