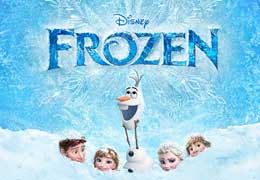 The Snow Queen exiles herself because everything she touches turns to ice and  whose icy powers have trapped the kingdom of Arendelle in eternal winter. Nevertheless, her sister Anna, a fearless optimist, teaming up with rugged mountain man Kristoff, a hilarious living snowman named Olaf and a reindeer set out to find the queen and bring her back to the kingdom.

They must battle monsters and an evil prince before convincing the queen to return.