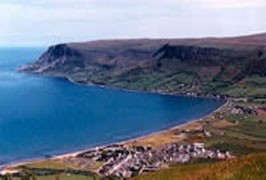 In the 18th century the elementary education of the masses in Ireland was mainly carried out in the hedge schools, so called because of the custom of holding classes in the open in fine weather. During bad weather a shed was generally provided and in Glenariff one of the caves near the pier provided shelter. It is marked by a memorial stone.

Another of the caves here was occupied by an old woman, Nanny, who was the local poitin supplier.

Directly below Red Bay Castle is a cave which is reputed to have been an escape route from the castle. In 1949 workmen found two bronze axes, a stone axe and some silver coins in this cave.

Glenariff with its magnificent scenery richly deserves its title “Queen of the Glens”. It lies in the heart of the world famous Nine Glens of Antrim, a designated “Area of Outstanding Natural Beauty”. Glenariff is a perfect U-shaped valley, whose sides are rocky precipices rising to wild moorland