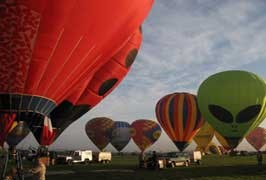 There is a feast of colour planned for the skies over Waterford when the Irish National Hot Air Ballooning Championships return to Woodlands Hotel, Waterford, Co. Waterford. There will be 40 balloons attending this year’s event making it the biggest ballooning event in Ireland for many years. There will be hot air balloons from the England, Scotland, Wales, Isle of Man, France, Holland, Italy and the USA will attend.

The event will coincide with Waterford City’s 1100 Birthday celebrations.

The Irish Hot Air Balloon championships is also the longest running balloon meet in the world. Something to be very proud of baring in mind that at all times the Irish meet has been run on a voluntary basis.

The public are actively encouraged to come out and see the balloons as they launch. The balloons will make a spectacular display in the skies over Waterford so bring your camera.

It is not possible to provide flights to the public during the week however it is a fun, social family event for everyone’s enjoyment so get your cameras ready and record your favorite shots for the album.

The International balloon teams look forward to flying in Waterford, especially in this the 1100 birthday of the city and have fond memories of how the people of the City and County treated them in previous years. A number of events and entertainment are organised for the balloonists during their stay, such a BBQ, music night and tours of Mount Congrieve, or Lismore Castle. They also take time to visit the Suir Valley Railway, Waterford Crystal and walking tours of city.

Hot Air balloons will fly in surface winds of up to 10kts and safety is always the number one concern. They will have a weather check line in place during the event. This will be updated twice a day to give an indication of the possibility of flying the next slot.

The Championships were last held in Waterford in 2009 and were a huge success as they were in 2008. The Woodlands Hotel in the City will be the headquarters for the event with the teams staying in the hotel and various hotels close by.

Woodlands will be one of the launch locations which happen every morning and evening subject to flyable conditions. Other locations for Launching being considered are , The People’s Park, Piltown, Lismore Castle, Carriganore, Carrolls Cross and Waterford Airport.

In addition to the launches, the balloonists plan to provide a spectacular Night Glow where they inflate at night to the sound of music which, in 2008 and 2009 attracted huge crowds to the Quay.

The balloonists also plan to have a meet and greet event in a location like the Peoples park where they will erect the baskets and burners and the public can ask the crew questions and take photos. During the event the crews will travel to local schools to demonstrate the balloons and talk to the school children about the science of ballooning