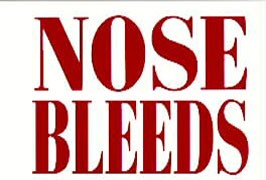 A nosebleed can be very scary the first time it happens. When you look at your child all you see is blood every where. First  relax, take a deep breath and remember a nosebleeds are messy and can be uncomfortable for the child but they are virtually never dangerous and the blood loss is almost always minimal. We at Familyfun have put some some tips to help you get through this situation.

A nosebleed is sudden bleeding from one or both nostrils, and may result from a variety of events: a punch in the nose, breathing dry air, allergies, or for no apparent reason. Nosebleeds are common. Most often they are a nuisance and not a true medical problem. But they can be both.

What not to do:

Do not tilt the casualties head back as the blood may drain down their throat and induce vomiting.