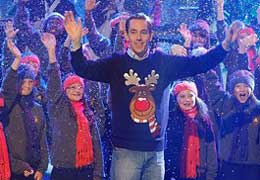 The Late Late Toy Show will reveal all the most coveted toys of Santa’s sack this year, with plenty of gadgets for the young and the old

Each year it’s bigger and better than the previous, with special guests and musical talent from around the country, making it a show to not be missed!

NOTE:- The annual show, which will be broadcast on RTÉ1 and will take place after the 9 o’clock news on Friday 25th November