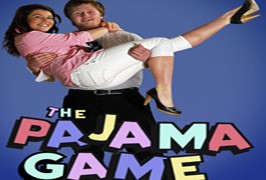 Set in the midst of a Trade Union dispute at The Sleep Tite Pyjama Factory in Cedar Rapids, Iowa, this musical charts the growing relationship between the head of the grievance committee Babe Williams, and the new superintendant Sid Sorokin. Packed with memorable numbers, such as "Hey There", "Once a Year Day" and "Steam Heat", this production will entertain every member of the family.

The Pyjama Game was only the eighth Broadway musical to achieve a run in excess of a thousand performances and won three Tony Awards, including that of Best Musical in 1955 and two more in 2006 including Best Musical Revival.

Box Office :-    Tel. +353 01 296 9340
The Mill Theatre is located in the heart of the new Dundrum Town Centre. You can find The Mill Theatre in the town square opposite the cinema with its entrance beside