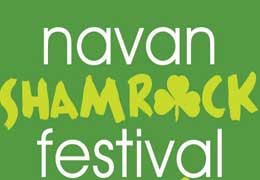 The Navan Shamrock Festival, 2017 is the premier annual festival event in Navan town. On March 17th this year they will be among the 150 million people world wide who celebrate our patron St. Patrick. Unlike the rest of the millions, the people of Navan have the chance to celebrate their St Patrick in the very places where he walked The Hill of Tara and picked the shamrock, in the Royal County Meath and in the town of Navan.

The traditional street parade will take place as usual and promises to be one of the highlights of this year’s Navan Shamrock Festival.

The people of  love fun and it is their pleasure to make it possible for everybody to have fun too. This year they have a seven day community festival starting Thursday March 16th until 17 March and it’s just for you.

This year they have decided to launch the festivities with the annual  firework display which will take place in the Blackwater Park This is a great one for the kids and adults alike.

The Mc Fadden Funfair offers thrill seekers the rush and exhilaration of the many rides while also providing the more subtle rides and games for the less adventurous and of course child friendly entertainment.

This event is always a cracker for the kids and the adults.

The traditional St Patrick’s Parade in Navan will take place on the 17 March at 14.00 and promises to be one of the highlights of this year’s Navan Shamrock Festival. Starting from the Enterprise Centre  Theme this year is Echoes of 100 years

To Find OUt More About St Patricks Parade Navan