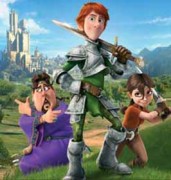 Justin and the Knights of Valour

An unlikely warrior Justin dreams of becoming a Knight just like his Grandfather, Sir Roland in this magical animated family adventure. However all Knights have been banished from the Kingdom by his mother, the Queen and has turned the Kingdom into a bureaucracy, ruled by lawyers their strict rules. Encouraged by his Gran and after saying his farewell to his supposed sweetheart Lara, Justin embarks on the ultimate quest: to train to become a Knight and to recover his legendary grandfather’s sword.

Along the way he meets the beautiful, but feisty, Talia, a quirky wizard called Melquiades,  the handsome, but misguided, Sir Clorex and upon reaching the Tower of Wisdom is mentored by the three wise monks, Blucher, Legantir and Braulio who tutor him in the ancient ways of the Knights of Valour.

However Justin soon learns that banished Knight Sir Heraclio is putting together an army, with his faithful sidekick Sota, to overthrow The Queen and take her Kingdom.

Justin must quickly rise to the challenge and find the courage to become the Knight he truly wishes to be.

Join the unlikeliest of heroes and his friends on the journey of a lifetime that promises nail biting adventure for all the family.